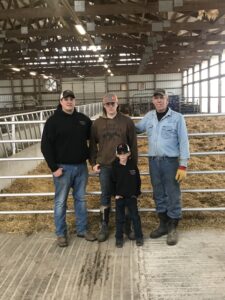 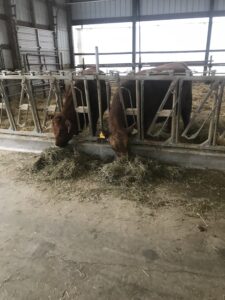 Facts about the Farm: Wetenkamp Farms was established in 1993 by Rick Wetenkamp. The family started as a small cow calf operation utilizing a grazing system. Operating as a true family farm, Rick expanded the business with his son Eric in 2005. Eric purchased cattle of his own to expand the genetic base of the herd and retain more heifers. Staying progressive through the years, Rick’s youngest son Landon, joined the farm in 2017. Landon purchased his own cattle to expand the herd. Over the past 27 years Wetenkamp Farms has grown to five different locations with various facilities. Each facility plays a key role for the success of their daily operations. Today, Wetenkamp Farms is completely an Angus cow calf operation. They primarily utilize grazing on many different pastures to aid in the production of high-quality cattle. Along with the cow calf operation Wetenkamp Farms has also developed a finishing program to locally market 100% Angus beef directly to restaurants and consumers.

Facts about the Animals: Both Black and Red Angus originated from Scotland. Angus cattle are polled and solid black or red in color. In the United States there are two separate organizations, one for the Black Angus, which is the American Angus Association; and for Red Angus which is the Red Angus Association of America.  Angus is the number one ranked beef breed in North America.   Angus cattle are sought after for their high quality meat and their capabilities of grass and forage conversions.